Unfortunately, sometimes an executive can earn a reputation as out-of-touch, cold, and unaware of the challenges facing the boots-on-the-ground of an organization. Most executives that we spoke to are (unsurprisingly) disappointed by this criticism, and want to actively find ways to improve their mindful awareness as leaders.

Our objective was to design and build a realtime, mobile multiplayer leadership learning experience that breaks down the walls around mindful awareness through real-world decision-making scenarios.

We started the project with two primary resources: (1) a three-day, in-person tabletop leadership simulation and (2) a team of experienced leadership coaches that have facilitated the simulation for several years. Over the course of the first few weeks of the project, we centered an intense focus on gaining empathy with the users. Among several big questions, we parimarily wanted to understand:

As a busy executive, what was it like to walk into a room, sit down at a table, and "play a game"?

Most participants would walk into the room on Day 1 with a certain expectation of what the following three-day seminar would entail: a 200-slide presentation deck, some networking lunches, and maybe even a few scenario-based roleplaying sessions. They generally had no idea what they were in store for. 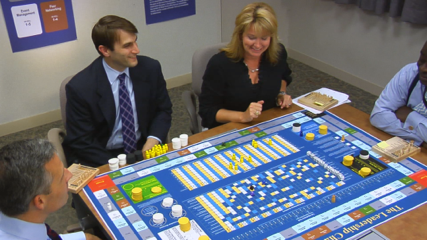 Once all participants were seated at their assigned location among the dozen tables in the room, the simulation would be revealed. An overwhelming, almost sarcastically-large, complex board, with dozens of pieces, colors and printed rules. The facilitator would begin by explaining the basic rules, which were intentionally opaque and confusing. Executives were forced to ask questions of both the facilitator and the other participants at the table just to take their first turns.

As the simulation progresses, participants would need to resolve scenario-based crises. Initially, executives would attempt to resolve these conflicts alone, using their own resources and skills. But as the simulation unfolds, participants gradually realize that they gain very little by competing with the others at their table. Instead, executive-by-executive, the simulation turns cooperative, with participants realizing the impact they can have on those around them. Eventually, after a series of especially chaotic crises, the different tables in the room realize they they too have an impact on each other, and can cooperate to progress more efficiently. 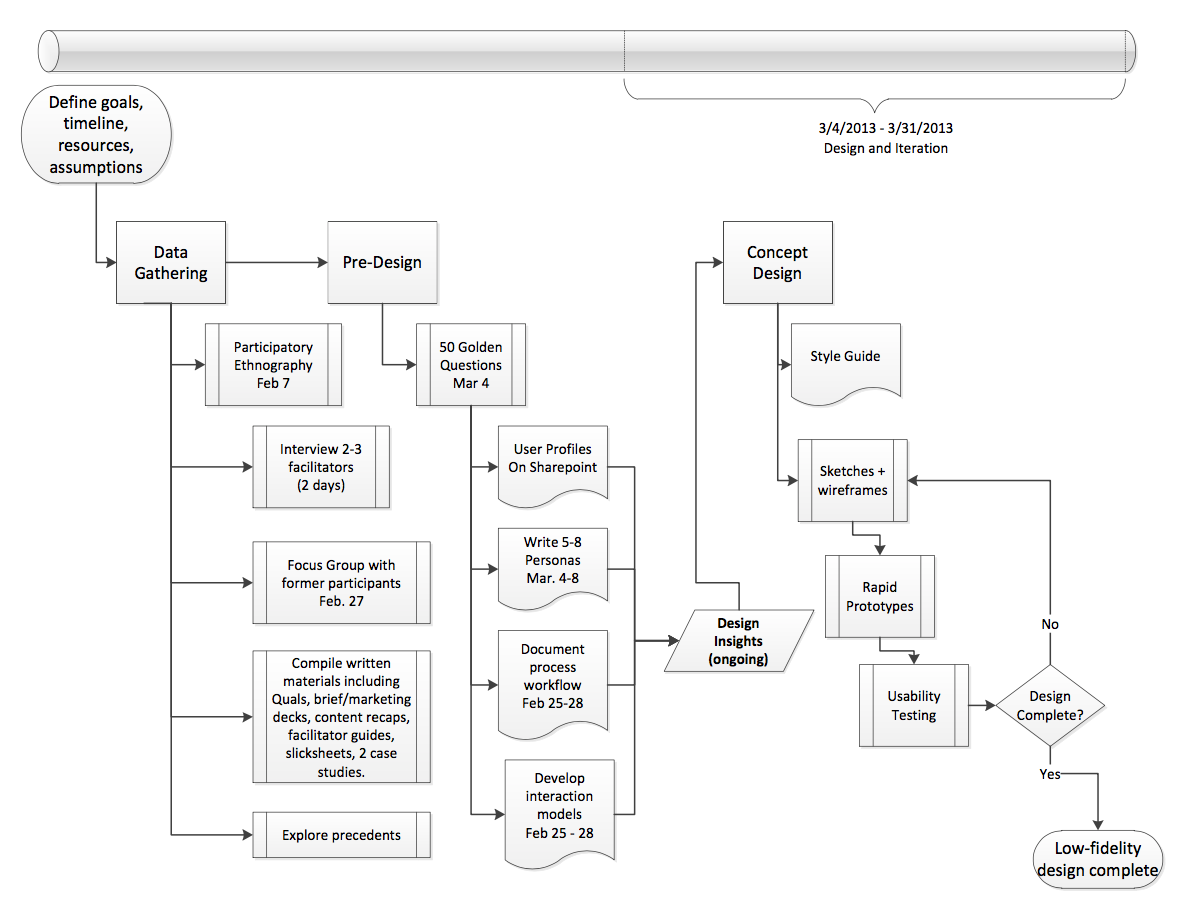 To help build empathy for our users, we dove headfirst into our resources through playtesting, detailed task analysis, and user observation. We documented every single interaction that a user might encounter throughout the three-day experience, and we mapped-out every decision that a user might face. Coupled with this mapping, we identified the factors that users would consider when making each decision. 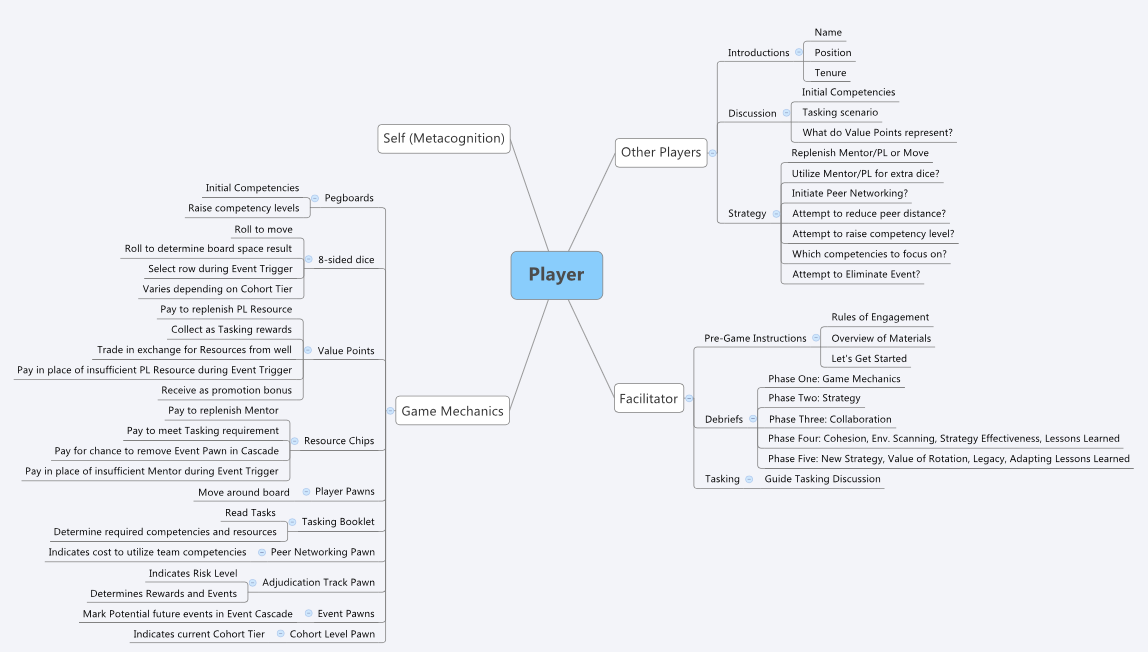 Interaction map documenting every interaction occurring in the simulation. 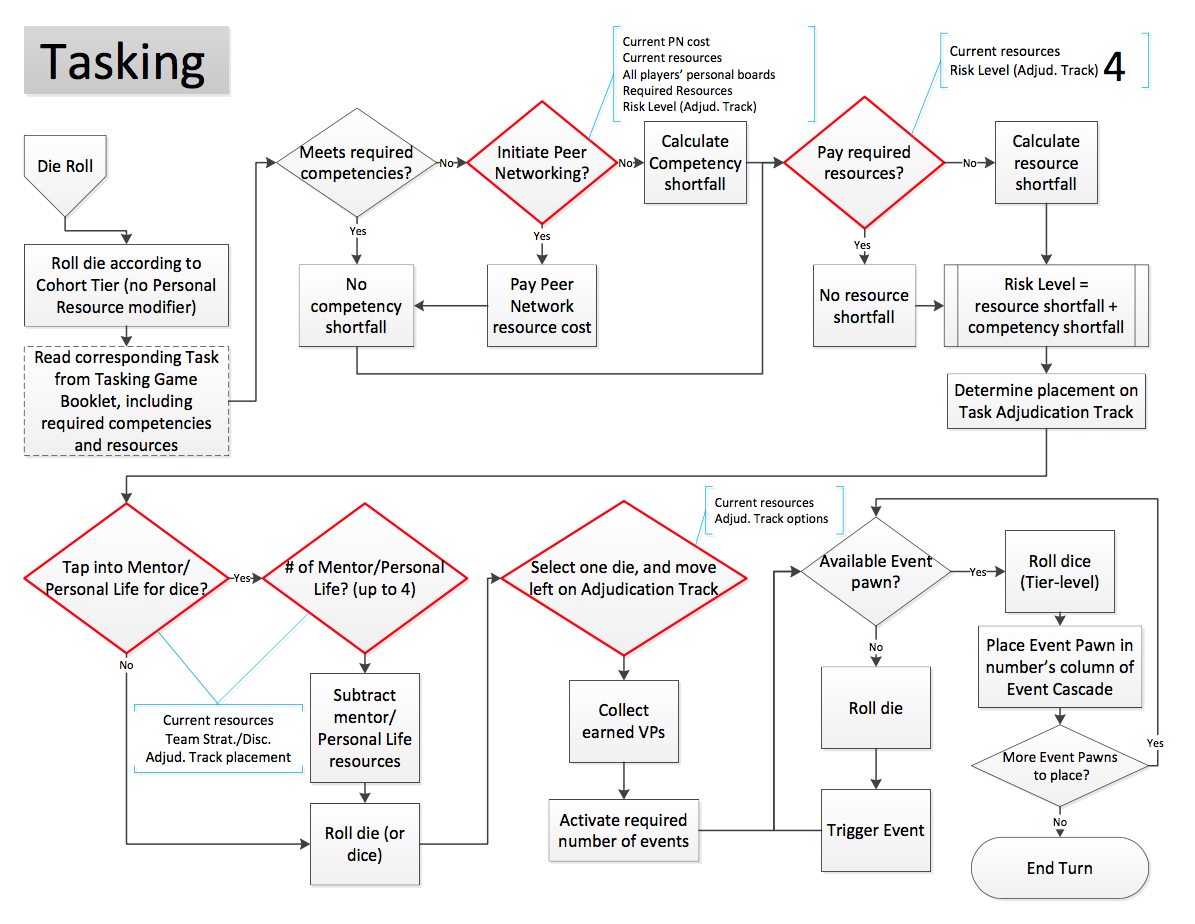 In order to consolidate our research into actionable strategies, we developed several user personas that would serve as empathy guideposts throughout our design process. 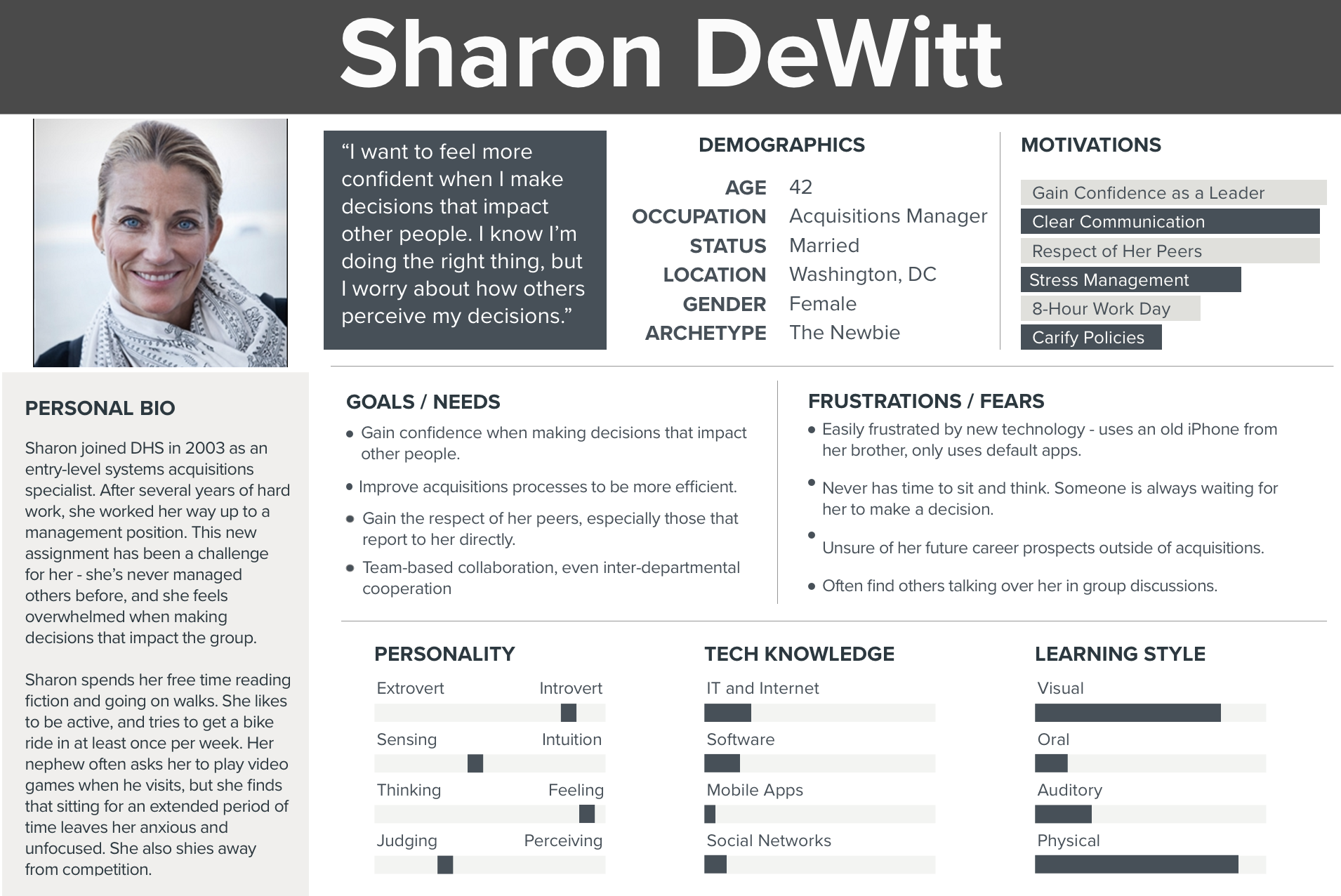 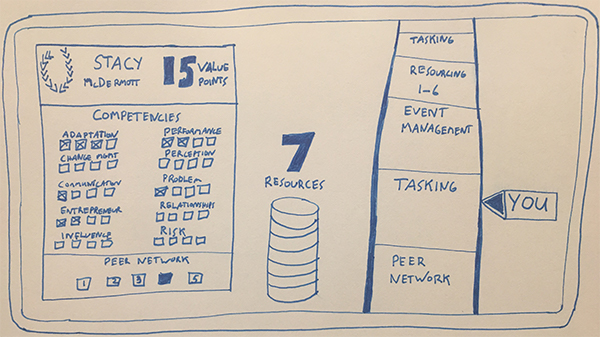 Rough sketches of the board overview interface. 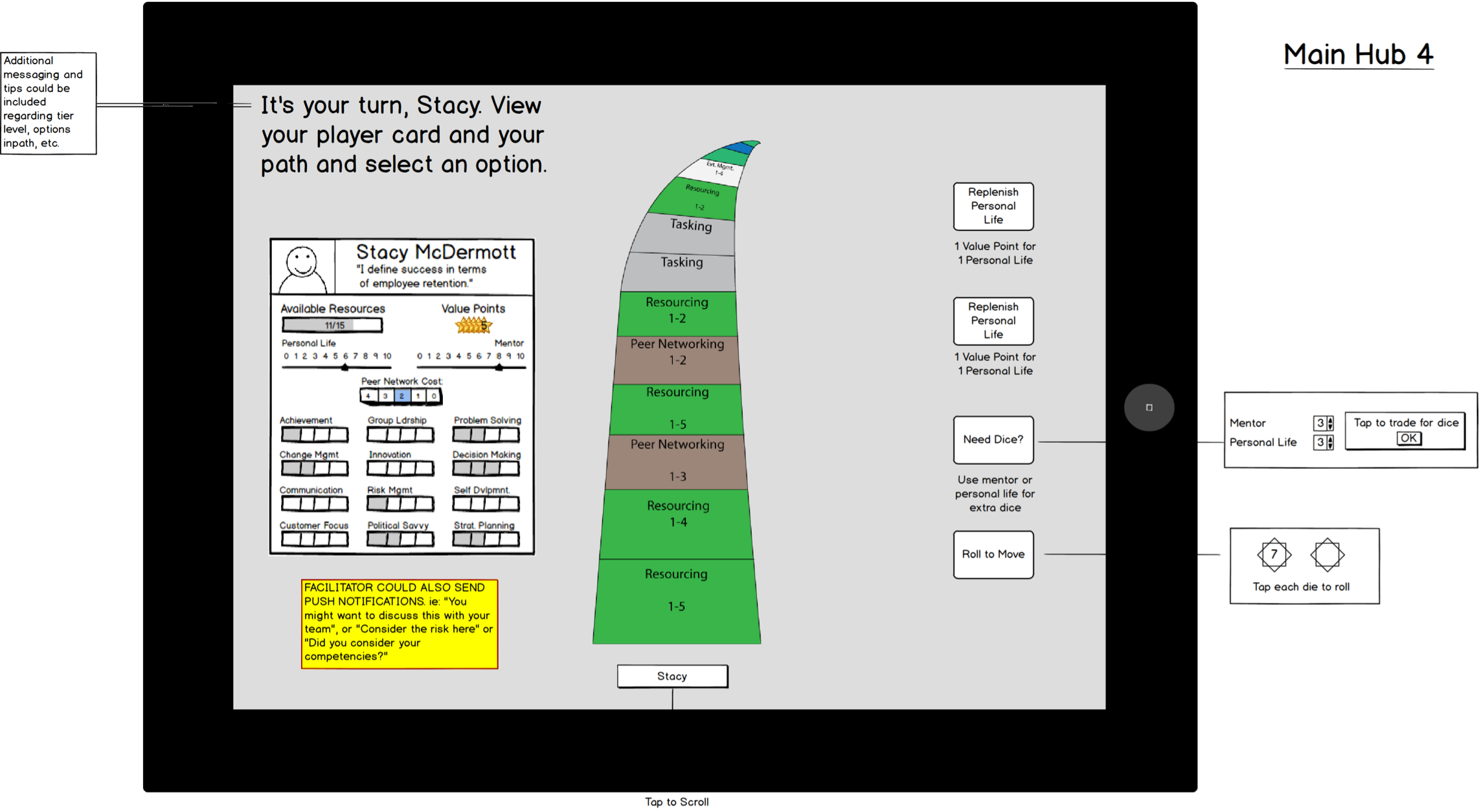 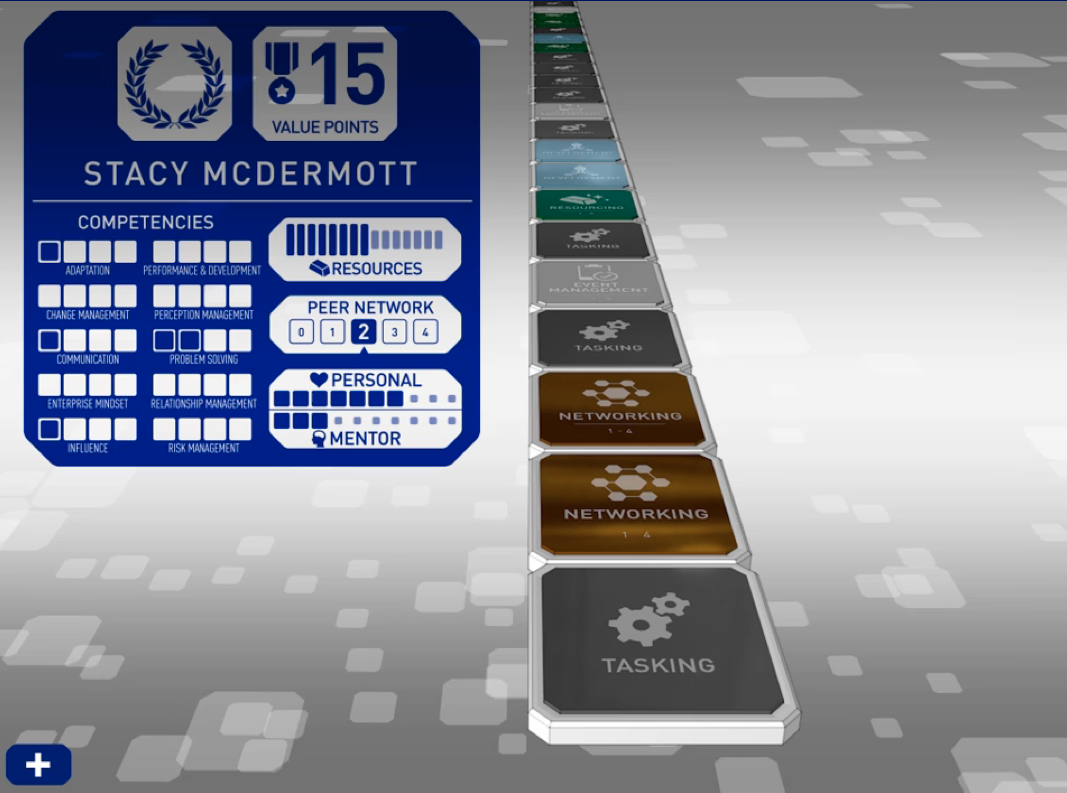 After eight months of research, design iterations, game development, and user testing, a functional minimally-viable product was completed and tested with live clients during three daylong pilot sessions. Early feedback was mostly positive, with users reporting an increased level of engagement and likelihood to participate again. Development on the project continued into a second phase focused on remote participation.