How might we encourage members of the public to take an active role in combating human trafficking in the United States?

Design and deliver a series of online courses for government employees and the general public to learn how to recognize and report the red flag indicators of human trafficking activity around them.

As lead designer on the project, I worked to ensure that the program was meeting our client's stated objectives. In this role, I met weekly with client stakeholders to pitch design concepts, provide status updates, and answering any technical questions that arose. Internally, I managed the 4-person design/production team on a daily basis, collaborating with visual designers, video editors, and instructional designers.

To help put an end to human trafficking in the United States and around the world, Congress has tasked federal agencies to work in partnership with the private-sector to end human trafficking. As a part of this effort, our team collaborated with the anti-human trafficking arm of a large federal agency to build a highly-interactive digital awareness and education campaign for government employees and members of the general public. 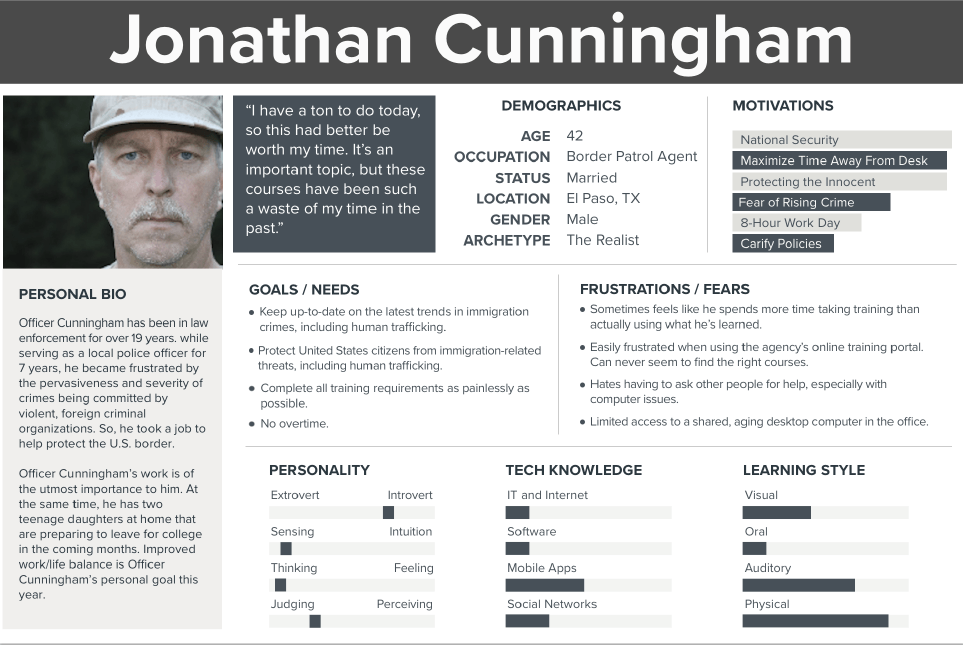 A sample user persona based on design research data.

We conducted our initial research phase through three primary means: (1) interviewing Subject Matter Experts from across law enforcement and administration, (2) reviewing existing human trafficking awareness materials, and most importantly, (3) a series of intense, emotional interviews with survivors of human trafficking. The major design insight we took away from our research was that in order to convince people to take action, we would need to instill an emotional connection between our users and the victims of human trafficking.

Standard e-learning wasn't going to cut it for this project. We needed more than a slide deck and some talking points. The final design strategy revolved around adding rich interactions to a series of previously-produced video scenarios. This approach of re-using existing media property allowed us to double-down on designing and building effective interactions, like the "Red Flag Indicator Challenge."

An "Indicator Challenge" works like this: learners would watch a real world video scenario unfold. Throughout each video, small indicators of human trafficking occur. Every time a learner sees or hears something that raises suspicion, she presses the "Indicator Spotted" button. After the scene completes, learners walk through each indicator that appeared, learning about why certain behaviors or actions may or may not indicate human trafficking. At the end of the experience, learners are asked to make a determination of whether they should report what they'd seen to authorities. In practice, this final step is the most important objective of this campaign: getting users to take action when they seen indicators of a crime in progress.

Over the course of the project, we produced nearly two hours of anti-human trafficking content in the form of 15 microlearning videos, 10 interactive experiences (including "Indicator Challenges"), and pre- and post-assessments. Since publishing, our work has been experienced by thousands of people across the country that might encounter indicators of human trafficking activity.